Right from the stone age, when mankind couldn’t communicate, when the homo-erectus was unaware of the basic fundamentals of life, the women had an inner need to look their best. They adorned themselves with leaves and flowers, the only ornaments, then known.

This innermost feeling  did not undergo any change in the following years.  This inherent need for the female species to look good posed quite a bit of a challenge for the discoverers and scientists of the world. Nothing was ever good enough for the ladies. There was always something missing. They wanted to look fairer and more spotless and ever so radiant.

In a major breakthrough, the scientists and skin specialists came up with powder and foundation. Women could just apply it and instantly look 47 tones fairer. Following the foundation, a lot of discoveries were made. Compact, powder, bronzer, shimmer etc were heartily accepted by women all over the world. Lipsticks were welcomed by many and chewed by some. The permanent beauty creams, powders, facial gels, lotions, face washes, packs, solutions and pastes became common. 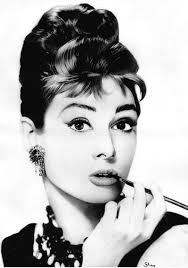 Yet, there was something missing. The answer could not be found. The kajal, eye liner pencil, stick, sketch pen and permanent marker makers were baffled. The hair salon owners and plastic surgeons gave up. The manufacturers of the fruit, herbs, sandalwood, Cl2O2H3NSO4PT1N7 induced creams were clueless. So were the gold, coal, cocoa, salt, mud, ostrich eggs and fairy dust cream makers.  It looked like there was no solution.

However, one guy did not admit defeat. He did massive research for years on end. This guy not only studied chemistry, biology, physics, journalism, cooking, dairy technology, goat farming, crockery design, bio mechanical engineering, law and applied astronomy; but could also successfully tell the difference between ‘wedges’ and ‘heels’. This guy found the answer! He figured that beauty is no longer in the eyes of the beholder, but in fact in the hands of the camera holder. Who cares how the girl looks like in public as long as she looks hot online! So why spend time applying orange cream on her face when you can just color her picture orange. This concept developed by him was called ‘Facial Improvement via Layering Treatment & Enhancement Research’ which he later shortened to F.I.L.T.E.R.

He proposed the FILTER for camera phones. This new technology was a miracle. The phone companies were all over it! And the ladies! They were irrevocably in love with it! The ‘filter’ started beautifying them like no one ever had. They need not spend thousands on beauty treatments, they got beauty ‘effects’ free!

And BAM! Everyone started seeing the world through a filter. There is no end to what it can do. It possesses the ability to make a a beige colored person green, and well a green color person beige. The possibilities are limitless. But, too much of something is never good. Women who used to look 47 tones fairer, have started looking 3,77,540 times fairer. Girls who earlier used to look like they chewed lipstick, now look like as if they had devoured it (mercilessly). Pink looking girls are  now maroon. Guys are blinded on seeing ladies’ display pictures. 12 year old girls on FB turn out to be 53 year old aunties. The world has become deceitful and everyone has a filter on their faces (unfortunately not one in their mouth). The selfie which was earlier an obsession has now became a disease.

There is no way to defeat the filter. It has no side effects, is free and now a socially accepted norm. (more like a picture etiquette.) You didn’t put a filter? You shameless girl!!

Yet, there is something missing.

My name is Jamila Sidhpurwala, you can call me Jammy, Jam, Jamie, Mila, Jamyla, Jams, but please don’t. I am 25 years old, and I am an Architect. I come from Nagpur, India and am currently staying in Liechtenstein. So? You might ask. What makes you so special Ms. Jammy? (even though I told you not to. Typical.) I am not a politician, or a controversy queen or an environmental or animal activist or the current favorite, a Feminist. I can’t tell the future, nor can I tell you amazing recipes. Then, why should you read my blog? Well, all I can say is this. If you break me down into small building blocks, tiny particles, minute elements, infinitesimal atoms, you will conclude that I am nonchalantly charged, slightly unstable and loaded with features like 324 MP camera, sound and gesture recognition, genuine intelligence and 18-48 hour survival life. Although I live on food, I survive on wit. Even though I sleep for energy, I jest for power. While I speak to convey, I humor to influence. And despite the fact that I walk to reach, I talk to reach out!!! View all posts by Jamila